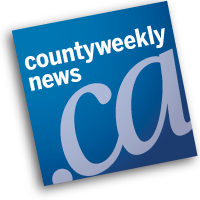 They’d give you the shirts off their backs if you promised them a fish at Merland Park.
Derby runs on fun, fishing and community spirit 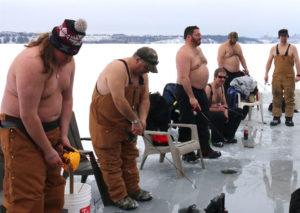 One of the County’s most popular winter events is set to kick off on Feb. 9, with the 9th Annual Ice Fishing Derby at the popular Picton resort and, once again, they’ll be fishing shirtless on Saturday afternoon.
Anglers from across the province and south of the border flock to Merland Park every year to take part in the derby, filled with fishing, fun and games.
This year won’t disappoint with the fishermen discarding their shirts during Saturday afternoon’s On Ice Games.
The event runs three days and Saturday afternoon (1 p.m.) is open to the public and will feature a prize table with more than $10,000 in prizes.
Organizer Kim Lavers Mulrooney said they are expecting the largest turnout yet.
“It’s been growing and growing every year so hopefully the weather cooperates again this year and we get another healthy crowd,” she said. “People love to get outdoors and, let’s face it, there’s not always a lot to do outside in the winter.”
Proceeds of the weekend will go to the Kiwanis Club Terrific Kids program for Prince Edward County schools and almost $15,000 has been raised in the first eight years.
Lavers Mulrooney said for the first time since the event started in 2009, the Merland Park cottages are sold out for the weekend, almost guaranteeing registration for the derby will also be the largest ever.
“It’s really quite amazing because we do very little advertising for this, but I think it’s mostly just word of mouth and social media,” she said. “About four years ago we had a large group come from I think the west side of Toronto and one of the guys in the group talked all the time about how much he loved (Merland Park) and it was one of his favourite places,” she said. “Unfortunately he passed away and this year the entire group is coming back to honour his memory – it should be pretty special I think.”
The On Ice Games will include: Shirt off – fish on (15 winners); Washer toss (1st & 2nd place winners); Ladder ball (1st & 2nd place winners); Fishnet stocking (1st & 2nd place winners); and the Pitch & release (1st & 2nd place winners): Tim Horton’s Donut Eating Contest for kids.
Cost of the On Ice Games is $20 for members of the public and $10 for children 12 and under.
Lavers Mulrooney said fun combined with community support are making the event more popular each year.
“We couldn’t do this without the Kiwanis Club and when you see them out on the ice running the different games they’re having as much fun as the kids are,” she said. “We get amazing support from local businesses like Canadian Tire, Tim Hortons, The Source and Home Hardware and all these things mixed together makes for a successful event.”